So I've been participating in the Analogue Hobbies Paint Challenge for the past couple months. Right before the Challenge began I started on the Imperial and Rebel Specialists packs for Star Wars Legion. And after a few months I've finally completed them. So first up are the terrorist, err, Rebel specialists. 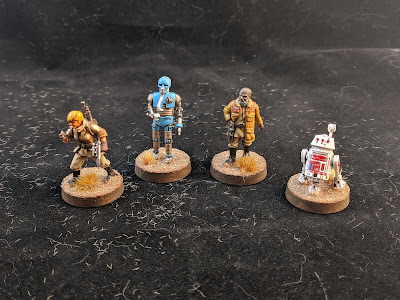 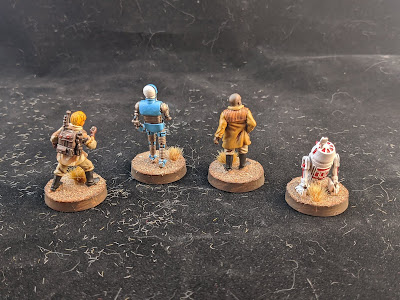 From left to right: Comms Technician, 2-1B Medical Droid, Rebel officer and an R5 Astromech Droid. Next are the Imperial specialists. 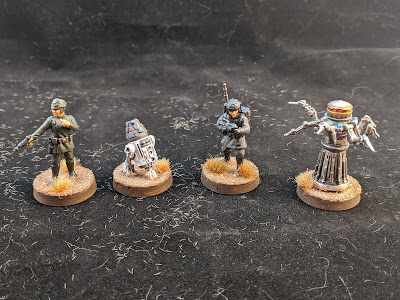 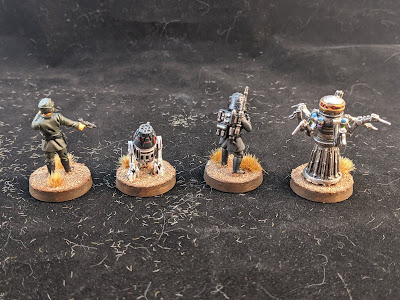 I really like the Star Wars Legion sculpts, they have nice strong detail and you don't need to be a Golden Demon painter to get them to turn out nicely.

I've had a request to get beck to doing reviews of boardgames that I play. So I'll go over a couple we've played recently. First is the new version of Dune from Gale Force Nine. 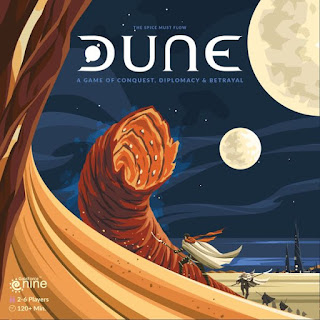 I've never played the original Avalon Hill version, but it's my understanding that GF9 changed almost nothing rulewise from the original. The box is quite small and the components are decent and perfectly functional. The only thing I'd improve on would be to have a bigger board. There's territories that span multiple sectors and you could have troops in that territory but also in each individual sector. This is important when the storm moves into a sector. See the image below. 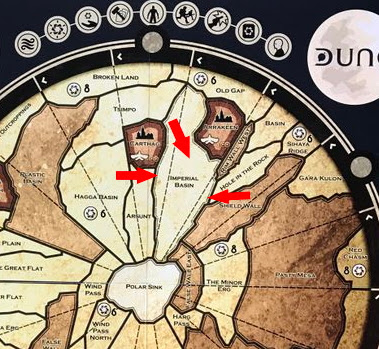 Each of the red arrows is pointing to the same territory: Imperial Basin. The dotted lines are sector borders. As you can see the Imperial Basin spans 3 sectors. That's all fine and dandy, but if you're placing troops in one of the side areas of the Imperial Basin it's kind of tight. The counters will overlap into a neighbouring territory. It's a minor quibble but it could be a problem if that area got busy with multiple troops from multiple factions. Honestly it wouldn't surprise me if GF9 actually came out with a nice big mat like they did with Firefly.

So there's 6 factions in the game: Atreides, Harkonnen, Fremen, Spacing Guild, Emperor and the Bene Gesserit. There was only 5 of us so the Bene Gesserit faction wasn't used. Each faction has their own special abilities and some of them have their own special victory conditions. The faction I had was the Spacing Guild. Everybody has the same number of troop counters, so outright crushing everyone with one faction can't happen.

You attack something and usually one side gets completely wiped out, so you spend time slowly building up. I could see it being a bit tedious. In our game the control of key territories didn't sway much back and forth until late in the game. And we went the full 10 turns. In the end no faction or alliance had the requisite number of territories. My faction did have a special victory condition and that was at the end of the game if no one has done their victory condition, then I (the Spacing Guild) and my ally win. And that's what happened. I was allied with the Atreides and we won.

In this game you have to ally with someone if you plan to take objectives or it's pretty much impossible to win (unless you're the Spacing Guild of course). I could definitely see this game going the full 10 turns every time and it coming down to no one winning (well except you-know-who). GF9 has already announced an expansion containing the Ixians and Tleilaxu. I'd definitely like to play it again but I wouldn't want to play this often as it could get dull after a number of plays.

The next game is Nations. 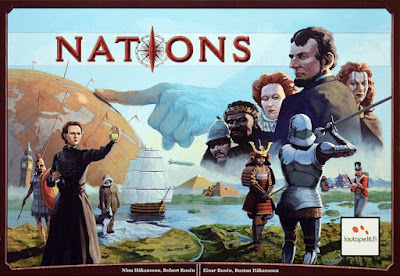 This is the third time we've played this and I'd gladly play this game many more times. I love this game. This game is a good, simple civilization building and managing game. The premise is you have a nation with it's own special ablilities, units and/or buildings. Every turn you can purchase cards to improve your structures and military units, build wonders, acquire leaders and colonies and wage battles and wars. At the end of each turn you 'harvest' resources from your structures, wonders, colonies and leaders. And depending on the size of your nation, you may have to pay out resources. At the end or every year you have to also deal with any war that takes place and the two random events that occur.

To reflect an expanding nation you pull meeples from a pool. When you pull a meeple from the pool and add it to your active meeples you increase the amount or food you have to pay out or lower your stability. It's a nice simple mechanic to control the expansion of your nation. You don't want to keep pulling meeples from your pool if you can't provide for them.

As the game goes on you can get better of everything. Each improvement with usually provide more resources but will require more resources to put into action. At the end of the game victory points are added up and whoever has the most wins.

A couple points about this game:
1. There is no actual map. This is a nice mechanic as it saves you having to worry about front lines and where exactly your military units are.
2. Wars can be devastating. Only 1 war can be 'purchased' a turn. At the end of the turn if your military value is equal to or above the threshold set when it is bought, then you're safe. If you're below, ouch! Early on I was hit with a war and it beat me up but I was able to cope. One of the other players got hit by a war reasonably late in the game and it completely trashed him. As one player put it "he was reduced to caveman status". And he pretty much was. He ended up coming dead last by a substantial margin. There's definitely strategy around purchasing wars and when to do it.

I like this game because you've got lots of choices and it's actually quite hard to directly effect another player. Managing your civilization is relatively simple and you don't have to spend a ton of time micromanaging everything.

The base game has only the 5 civilizations but there is an expansion, but for some reason no one has it. I looked on the manufacturer's website and they will only ship to Europe. Not sure how I'm going to get a copy as I'd really like to pick it up.