It's been a ridiculously slow painting month. I finally have the three remaining units for my two Mayday armies. First up is a pair of generals. The character on the left is from Armorum & Aquila and the one on the right is from 1st Corps. 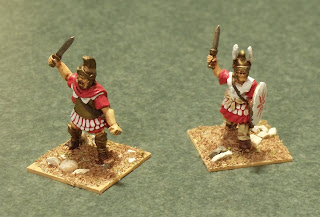 Next up is a unit of Seleucid Phalangites. These are also 1st Corps with transfers from Little Big Men Studios. 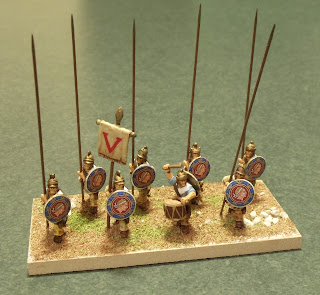 Next is a scythed chariot from Vendel. I was expecting painting it to be about as much fun as my Tomb King chariots, in other words: NOT. But it painted up nice and quick. 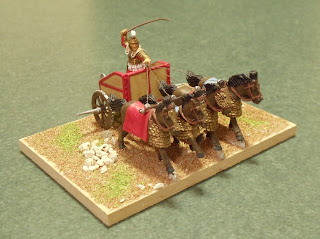 Finally is my second elephant. This is from Aventine Miniatures and is an awesome miniature. The quality of this mini and of the ones I've seen pics of are hands above all others. If you're building an early Roman Republic army I'd suggest Aventine. Transfers are from Little Big Men Studios. 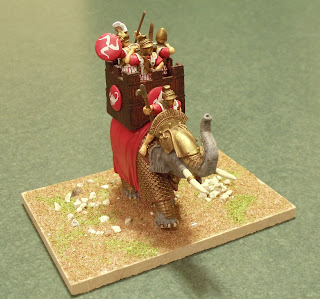 The only downside I have to my minis, is my basing is rather shite. I don't spend enough time on them. Now I just need to work on a tiny bit of terrain for my game, maybe a swamp and some trees.
Next up on my slow paint table is some more 15mm sci-fi infantry.
Posted by Scott M at 10:09 PM 4 comments:

Yesterday I had my friend Chris over for a 3000 point game of Warhamster vs. his grey & black Warriors of Chaos army. We played the Blood and Glory scenario. Six turns and 6 hours later we ended in a draw. Both armies bloodied but still half the units were still on the field. 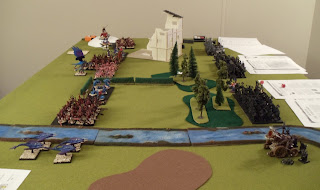 This was the first time I've run into Horde units. Chris had a horde of Marauders with flails and a horde of Chaos Warriors with the Mark of Khorne (giving them Frenzy). I was able to whittle down the Warriors before they got into melee but not the Marauders and they swept the Bloodletters they were facing into oblivion. My magic was rather lacklustre which was rather disappointing. Chris as his general had taken Archaon. This lord is rather painful to deal with and I think the only reliable way to beat him is with combat resolution.
I have a few complaints about the rules and I'll go into them below. If anyone has the answer to these or if I'm missed something in the rules, by all means let me know!
1. This first point in my opinion is fracking stupid. We had part of the battlefield split by two clumps of woods. Chris had his horde unit of Marauders going through one of them. I had him move through the woods at half speed. It wasn't till he was almost through that we saw in the rules that there's nothing stating a fully formed unit of infantry moves slower going through woods. Essentially it might as well be open terrain. This is utterly ridiculous.
2. Again on the woods and I think this really points out how 8th edition is tailored for shooting armies. If you're shooting at someone in the woods, regardless of how deep the woods are, as long as you can see the unit, you only get a simple -1 soft cover penalty. You could be shooting through 24" of woods and still as long as you can actually see the miniatures you can shoot them with that simple -1 penalty. And furthermore if you're a unit sitting in the woods you don't get any penalty shooting out of the woods regardless the size of the woods. W. T. F.???? That's cuckoo for coco-puffs.
3. The terrain in general. Enough with the f'ed up forests, rivers and swamps. How about terrain that doesn't do stuff but instead just sits there and acts like terrain.
There I'm done ranting.
Posted by Scott M at 1:28 PM 2 comments: