January has gotten off to a slow start. Last night I finished a group of 9 Pink Horrors. 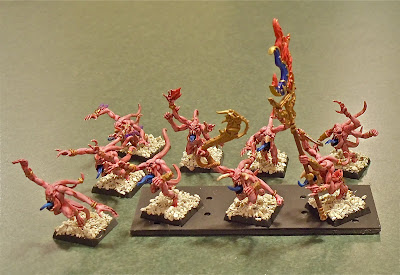 These are the new plastic ones. I really enjoyed painting these up and I think they painted up a lot easier than the old style metal ones I already have. Not sure how well they're going to rank up as I know my new plastic Bloodletters don't rank up worth a crap. This was from a box set so you'll notice that the unit champion model is missing. I'm going to use him as a Herald of Tzeentch and I've acquired a Disc of Tzeentch to mount him on.
Next up is a Greater Daemon of Nurgle and my homemade Blue Scribes base.
Posted by Scott M at 8:13 PM 2 comments:

Today I received a package of miniatures from Thomarillion. I purchased it on Sunday the 16th. They sent it the next day, the 17th. It got here today. The 21st. Four days from Egelsbach, Germany. And I thought Ground Zero Games was fast with seven or eight days. Two thumbs up for the Germans! It amazes me how stuff from the US takes at least two weeks and stuff from the other side of the world takes half the time. It's a strange world.
Posted by Scott M at 9:56 PM 1 comment:

Tonight I finally finished my unit of Khorne Bloodcrushers. 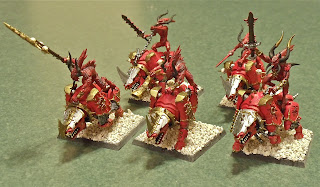 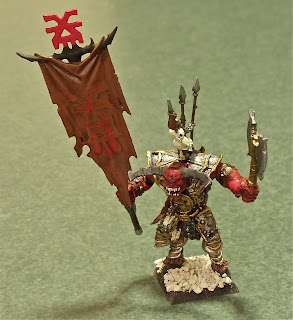 This mini was an old Bloodthrister, the Greater Daemon of Khorne. But as it's actually smaller than the current Daemon Prince (the weakest of the Daemon lords), it wasn't very suitable as a current Greater Daemon. So after a little hacking and gluing, voila! The really crappy part of this mini is the banner itself. To be honest it looks like shite. I wasn't able to paint a decent looking banner and it looks terrible. Better luck next time I guess.
Next up is more Daemons, what, I don't know yet.
Posted by Scott M at 11:36 PM 2 comments:

With the beginning of a new year I have to look back on my gaming accomplishments for the year of 2010. I have 5 main highlights of the year:
1. My #1 accomplishment has to be the completion of my Tomb King army for Warhammer. Finally! As the majority of the army is skeletons I was able to paint them reasonably quickly. I don't have any plans to add to the army unless GW comes out with something new for the army. That won't happen till they release a new army book, which looks like it won't be till summer sometime.
2. Also this year I banged out 2 fleets and some miscellaneous units for Full Thrust. I was able to paint these 2 forces rather quickly. Unfortunately I've only managed to actually get them onto the table once, so hopefully in 2011 I can get a few more games in.
3. Late in this past year I started another Warhammer army: Daemons. Thanks to taking all of December off, I was able to get a sizeable chunk of the army painted. I'm going to say that I'm roughly half done.
4. This year I got a number of bases for my Impetus ancient armies completed. I was able to get a few games in this year (but not nearly enough!). I found that if I'm getting tired of a project, painting up a couple of these units helps break up the monotony.
5. Finally for 2010, I was able to get in a large number of various board games. Here's the list of ones I played this year: Antike, Arkham Horror, Britannia, Carcassonne, Civilization, Colosseum, Commands & Colors: Ancients, Commands & Colors: Napoleonics, Conquest of the Empire, Descent, Dominion, Labyrinth: War on Terror, Pandemic, Power Grid, Puerto Rico, Settlers of Catan, Settlers of the Stone Age, Ticket to Ride, Tigris & Euphrates, Twilight Struggle and Warrior Knights. Quite the list.
All told I was able to get 485 miniatures painted this year. Not quite 500, but close. For 2011 I'm going to set myself a modest goal of 500. I'll reassess part way through the year to see if I can boost that higher.
For 2011 here's my goals:
1. Finish my Warhammer Daemon army. Looking around what's on my shelf and my painting table, I've probably got around 60 miniatures to paint.
2. Finish all my 28mm ancient units for Impetus. I don't have that many left, so this goal should be an easy one to accomplish. Also, I'm going to have to get more games of Impetus in.
3. My main project for the year is going to be 15mm sci-fi. I've picked up a pile of minis (probably a couple hundred) from Ground Zero Games and Rebel Minis. I'm planning on using the FAD4 (Fast and Dirty 4) ruleset with these.
4. I've got a number of small projects I'd like to do or at least start. I picked up a number of 15mm Egyptians in a trade that I'd like to make into an Impetus army. I also purchased a handful of Perry Samurai (enough to do half a Basic Impetus army) that I'd like to take a swing at and I've also got a handful more ships to paint up for Full Thrust.
5. More board gaming!
Onwards into 2011!
Posted by Scott M at 12:39 PM 2 comments: