Recently I finished off an eclectic group of figs and pieces. First up is a set of 28mm plastic Carthaginian Citizen Infantry from Victrix. Nice simple figures. 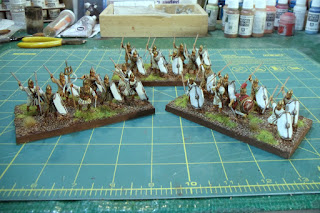 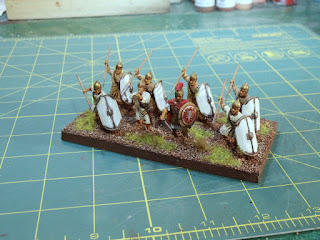 You may notice that the commander has a decal on his shield and no one else does. Well, cover your eyes children, this post is about to get R-rated. I had a nice set of decals for them. They were a set that was designed specifically for this set of figures. They were from Little Big Man Studios so they should be awesome.

The problem with this shield design is the decal has to be cut in half to go on each side of the shield boss. Well, once that was done, it was utterly fucking impossible for me to get the plastic cover off the decals without destroying the goddamn decal itself. So the whole fucking lot went in the bin. I can't believe how shit those decals were. So then I tried painting designs onto the shields. That would've turned out better if I got a drunk lobotomized chimp to do it. At this point one of the figs fell onto the floor and I honestly had to stop myself from just crushing it underfoot. I actually contemplated throwing the lot into the garbage.

So instead I just painted them a couple shades of white. Yuck.

The next set of six figures are metal fantasy figures. First up is a set of monsters. 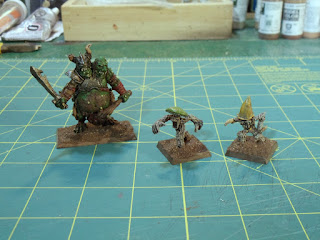 The figure on the left is a two-headed troll from Reaper Miniatures. Nice figure, although I'm not thrilled on my green paint scheme. The other two figures are a pair of Violent Fungi from North Star Military Figures Frostgrave line. 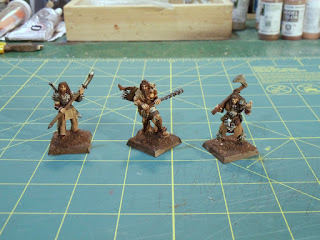 These human figures from left to right are Hans Bullman from Reaper, Hercules also from Reaper and a Barbarian Chief from the North Star Frostgrave line.

Finally as I'm running a War of 1812 game at our "not Mayday" event this Saturday, I needed some deployment points. 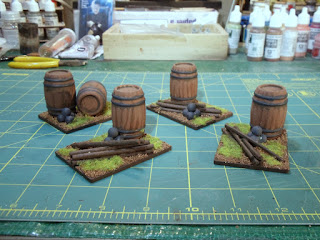 I scrounged these from various bits I had laying around. The barrels I think I got from Michaels, the cannon balls are beads from a necklace, the logs are from an old Italeri set (I think) and the bases themselves were part of the sprue from some MDF set. They came together quite nicely but are obviously only for 54mm. Beside a 28mm figure, the barrels would be monstrous.