Finished these last week and forgot to post them up! First up is a metal Stargrave Mystic from North Star Military Figures. 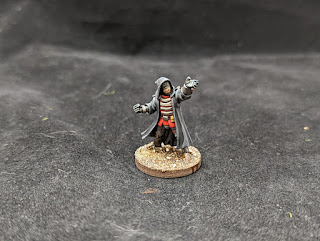 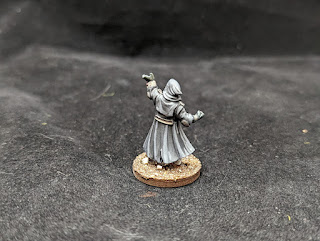 Next up is the last of the plastic Frostgrave Gnolls, also from North Star. 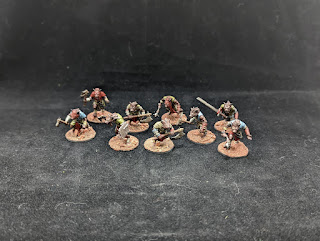 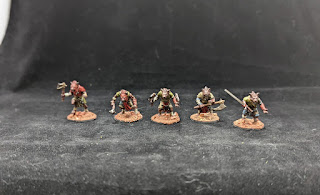 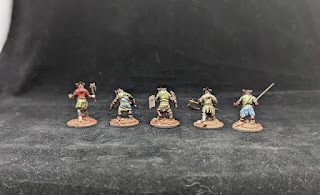 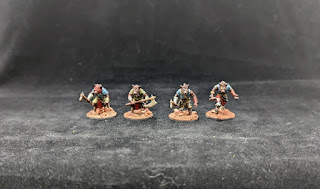 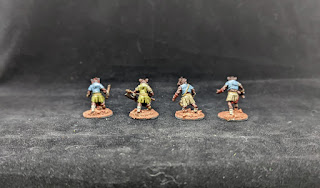 And finally is a large set of Stargrave objective tokens. I believe Terry printed these out for me, I can't remember actually. The ones in the last pic are metal and I believe they came from the Stargrave Nickstarter. Stargrave Medic for size comparison. 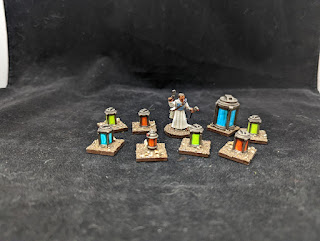 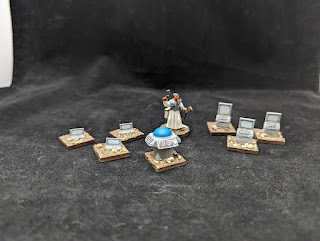 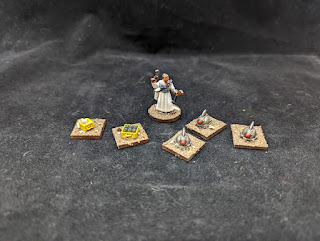 I've got another set of figs already completed and I'll post them up in the next couple days.
Posted by Scott M at 12:58 AM 1 comment:

Pair of Stargrave figs and a Bug

Here's the first trio of figs of the new year. We'll start with a pair of Stargrave figs. These 28mm metal figs are from North Star Military Figures. First up is a medic followed by a Hacker. 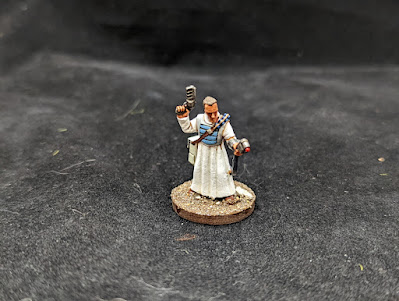 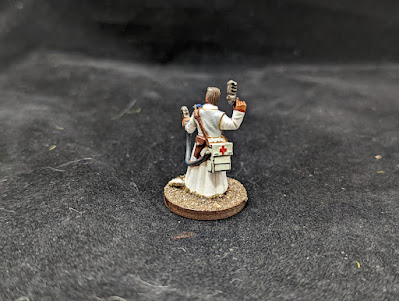 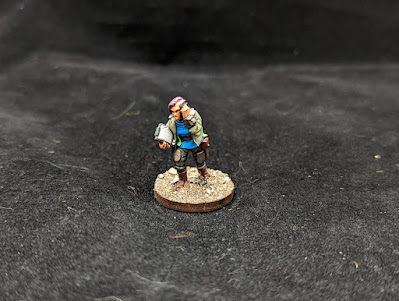 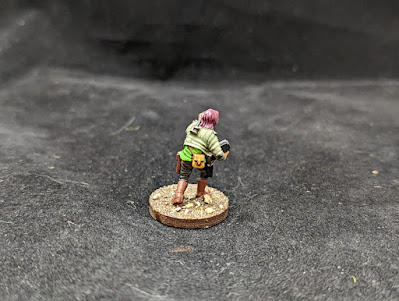 And finally we have an Ankheg. This is another 28mm plastic fig from Wizkids. I painted it up like the giant red ants I did last year. 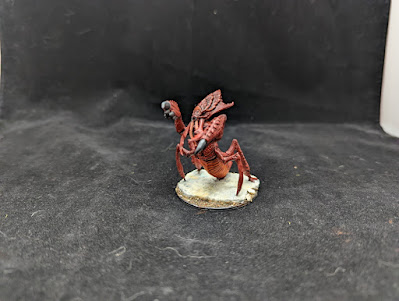 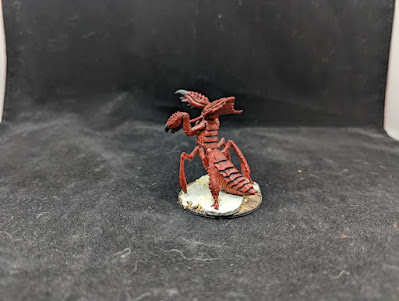 As I'm in the Analogue Hobbies Paint Challenge, I'm going to be churning stuff out (hopefully!) for the next few months.
Posted by Scott M at 10:59 PM 1 comment:

Happy New Year everyone and I hope everyone had a nice safe Christmas and New Years. Well, there goes another less than fun year. Maybe 2022 will be better.
So I'm, going to start this year with a review of my 2021 goals.
1. 28mm World War II French - completed.
2. 28mm World War II Germans - completed.
3. 28mm World War II Soviets - completed, and this should be ready to hand over to Chris.
4. 54mm War of 1812 - completed.
5. 28mm French & Indian War - I wanted to get 100 figures done and I ended up getting 108 done, so completed.
6. 28mm Samurai - wanted to get 4 bases done, but I only got 3 bases done. 75% completed.
7. Star Wars Legion - completed.
8. 15mm Sci-fi - did absolutely nothing with this. Still don't know what I'm going to do with it all.
9. 15mm Ancients/Medievals - wanted to get 6 bases of Ancients and 10 bases of Medievals done. Didn't get any Medievals done but got 15 bases of Ancients done. So 50% done this goal.
Overall I completed 6 goals and 2 others well on their way. Pretty good I have to say. I got 353 figs done, which is the most since 2014 and the most posts since 2012. Pretty good overall, and that's with the rather lax work I did over the summer months.
Boardgames
I got in 51 games, which was 7 more than in 2020. I spent the latter part of the year starting to dig into the unplayed pile. I need to get these games to the table and figure out if they're worth keeping. Also this year, I think I'm going to do a purge, I have at least 30 games that I'd like to get rid of.
Books
In case anyone is remotely interested in this, I got an astonishing 80 books read, of which 16 were audiobooks. My 'to read' shelf is a few hundred books long so I've got reading for a number of years. I also started a Goodreads page: https://www.goodreads.com/user/show/145077765-scottm
So here's my goals for 2022.
1. 28mm French & Indian War - complete everything I have.
2. 28mm Samurai - so I'm working on three forces, with one force almost done. I need to acquire a bunch more cavalry to do everything I want to. So my goal for this will be to complete 10+ bases.
3. 28mm Republican Romans - I want to start on this force to oppose my Carthaginians. I'd like to get 10 bases done.
4. 15mm Ancients/Medievals - I want to get all the remaining Ancients completed and get at least 20 bases of Medievals done.
5. 15mm Sci-fi - need to do something with these, just don't know what.
6. Get Rid of Shit - I need to thin down the stuff I have. As mentioned above, I've got at least 30 boardgames that I need to get rid of. I've also got a small box of unassembled figs that I need to get rid of.
Hopefully this year will be a little better than the last. Have a good year everyone.
Posted by Scott M at 4:09 PM 2 comments:

The figs below are the last figs I had painted in 2021. These figs are all from Warlord Games. Start off with some plastic Soviet infantry. 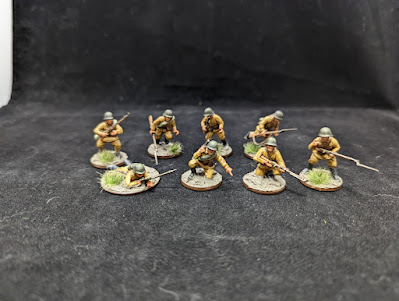 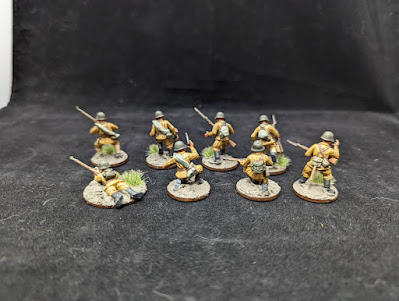 Next up is wee little T-38 tankette. The model is sold by Warlord but is actually manufactured by Trenchworx. 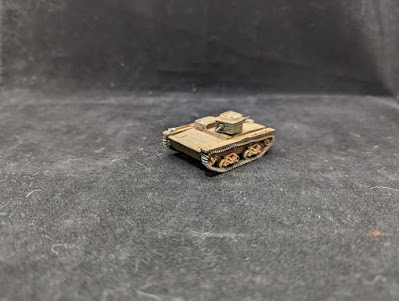 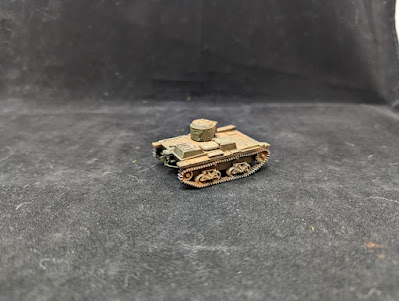 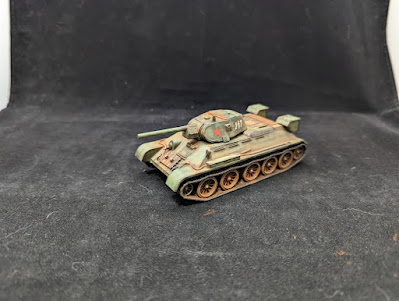 And a comparison shot with the two tanks. 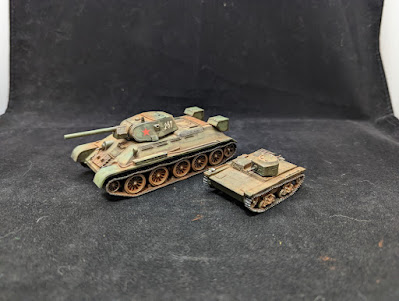 Bit of a size difference.
And finally we have a German Panzerjager I tank destroyer. 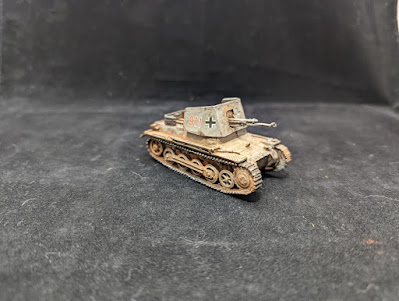 And that should be the end for 2021. I'm planning on doing an end of year post either later today or tomorrow.
Posted by Scott M at 4:16 PM No comments:

A Maze of Death by Philip K. Dick
Followed by:
Arslan by M.J. Engh
Elder Race by Adrian Tchaikovsky
Of Men and Monsters by William Tenn