Today I finished my last large unit of Daemons, a unit of 20 Bloodletters: 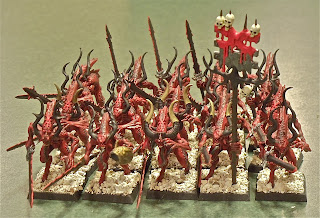 It's a good thing this is my last large unit as I'm getting tired of these minis that don't rank up worth a crap. Two boxed sets (20 minis) and a total of 4 minis have the swords held in the upright position for easy ranking.
I also finished a Tzeentch Lord of Change: 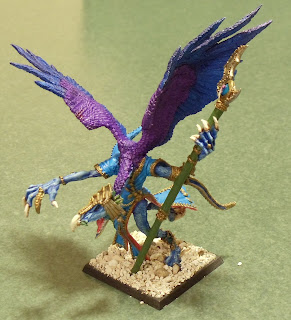 Next up is a medley of Tzeentch and Slaanesh Daemons.
I also got some good news this week as the new Tomb King army book will be out in May. I was rather surpised as the new Orc & Goblin book is out in March. That's a rather quick follow up by GW. I really hope they don't go with the same magic item number that they did in O&G. O&G only got a grand total of 8 magic items. Ouch!
Posted by Scott M at 6:39 PM