Had some friends over last night for a couple games of Imperial, published by Rio Grande Games. 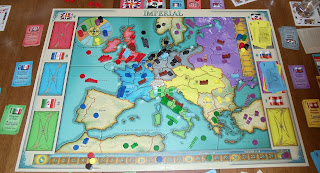 The game was roundly enjoyed by everyone. The game came handle 2-6 players, we played with 4. Post game discussion came to the conclusion that 2 players would be rather dull and 6 players would be a long dull grind. Four players is probably optimal. I look forward to playing this game again.
Posted by Scott M at 9:01 PM