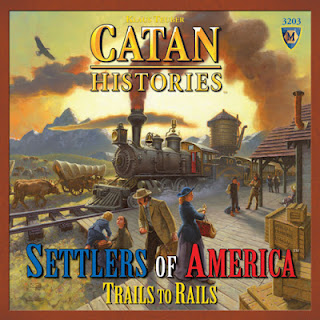 I played a game of Settlers of America on Friday.  Pretty good game for a Euro.  It's a lot longer than regular Settlers of Catan. It probably took us close to 2 hours to play.  The game has the usual collection of nice wooden bits although the board itself could be a bit bigger. Once you get your cities and rails and trains all on the board it can be a bit cluttered.

Last night Chris and I tried out a game of Stargrunt 2. Unfortunately I didn't get any pics.  As we had never played before and our game was a decent size, it took us probably about 5 hours to play.  Overall, I think this is the ruleset I want to use.  Once we got going it became easier and easier.  I didn't really find that the board got cluttered with tons of chits, which I think is a common complaint about these rules.  I've got an idea to partially aid in keeping the board relatively tidy, I'll post up a pic once I create it.  I can see how Tomorrow's War borrowed a lot from Stargrunt.  Too bad they didn't borrow how to organize a ruleset.  There are a couple wonky things in the rules, namely vehicle weapon ranges are crazy short, vehicles forbidden from certain terrain and the lack of reaction rules.  Not sure about fixing reaction but the others are dead easy to change.

Also a couple weeks ago, a couple friends and I went to Mecca, I mean the Sentry Box.  Picked up a pile of 15mm Ancient Egyptians for when I start building my Impetus NKE army. I also picked up a couple pieces of terrain and two boardgames: Hellenes by GMT and Inca Empire by Z-Man Games.

On my painting table is a pile of stuff: a unit of Nurgle Plaguebearers, a Nurgle character and a bunch of buildings (ruined and intact).