No it's not a new version of DBA, just an awful title to drag you in. This weekend was a rather productive weekend for painting as I got two batches of figures painted up. First up is a trio of Veteran Assault Tripods for All Quiet on the Martian Front. 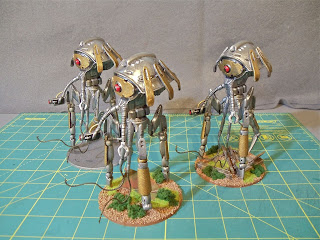 Figures are all plastic with some metal bits (all the extra plating is metal). As you'll notice one of the tripods is not based. Terry asked me not to base his figures as he'll take care of it himself.

Next up is the second army of the three I'm painting up for Dennis. This is the Spanish & Tlaxcalan army [IV/19( c)]. 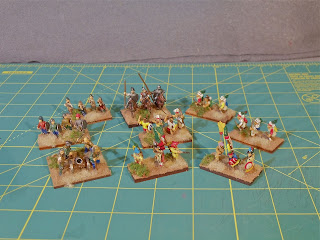 I believe the majority of these are from Black Hat Miniatures. This army is predominantly a shooting army with a Knight and Blade alongside some Artillery, Crossbow and a bunch of Bow.

On my paint table right now is a box of Victrix' new 28mm plastic Warriors of Carthage that I'm assembling.
Posted by Scott M at 10:01 PM