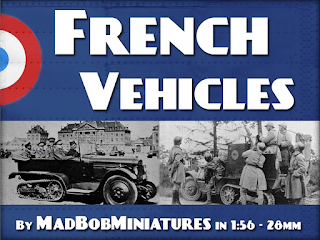 I found this Kickstarter last night and I figured I'd share it with whomever reads my blog. It's the second Kickstarter campaign run by Mad Bob Miniatures. The vehicles are all of the 'less common' vehicles variety that manufacturers probably won't make.  Not all the vehicles are French, some of them are German.  I'm down for a half dozen and with some luck the campaign will unlock the H39 tanks. If you're interested, maybe consider supporting them.
Posted by Scott M at 3:04 PM