A Whole Lot of Chariots

Tonight I finished the last of my Tomb King Chariots. I have to say I really, really hate painting chariots. They're a lot of effort for a unit that really isn't that good. The paint job on these is alright, I was just tired of looking at them. 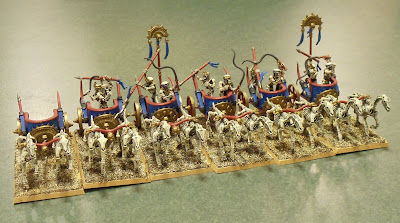 You'll note the chariot on the far left has no crew. I did up an empty chariot in case I need a mount for a Tomb King/Prince.

I also finished up a group of 6 oil drum bases. I am in the near future planning on doing up some 15mm sci-fi. I'm just waiting to get in on some early Christmas sales maybe from the likes of GZG or Rebel Miniatures. So far I'm just accumulating terrain.

These are from JR Miniatures 15mm World War 2 Stalingrad line.

Up next I have the last of my Tomb King miniatures: a group of 4 Carrion. And after that: Daemons!
Posted by Scott M at 10:42 PM