Tonight I had a couple of friends over and we played a couple games of Fantasy Flight Games' Mansions of Madness. 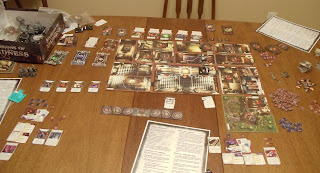 This game was a lot of fun, we knocked a couple games off in about 3 hours. It's a typical Fantasy Flight game: lots of high quality bits. The manual is reasonably long, but this is misleading as the game is really quite simple. If you've played Descent, then you'll find this game very similar. The only downside is the number of scenarios. There is only 5 and each scenario has a set of cards that go with it. If someone was to have a scenario repository (like FFG has with Descent and Tide of Iron) they would have to create cards to go with each scenario. FFG has actually done this with it's two expansions for this game as they're both Print-on-Demand. It would be interesting to see how it's set up. Regardless, I think I might pick this up.
Posted by Scott M at 10:30 PM